Promoters One World Entertainment and TEG Live have announced that rock n roll legends KISS will bring their spectacular ‘End Of The Road‘ tour to Australia later this year with very special guests Dallas Crane joining them on November 21.

In news that will thrill their legions of Aussie fans, the tour will commence in Perth on 14 November before playing Adelaide, two Melbourne shows, Sydney, Brisbane and a huge outdoor event in Townsville.

The ‘End Of The Road‘ tour, which began in January 2019, is undoubtedly the biggest and best KISS show ever (and that’s saying something), receiving incredible reviews from both diehard KISS fans and the media at sell-out shows across the globe.

So, Australia…. this is it. Come and celebrate the extraordinary career and music of KISS. 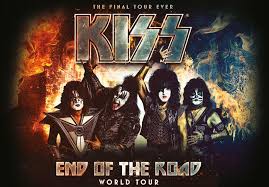